THE IMPORTANCE OF EARLY SCREENING

Vascular disease and stroke can be prevented, detected, and treated – that’s the good news. However, most people don’t take the opportunity to get screened. Typically, during these screenings, 5-10 percent of people looked at can have signs of vascular conditions, including blocked carotid arteries, aortic aneurysms, and PAD. Most people never know they have a problem.

Vascular disease outside of the heart – in the carotid arteries in the neck, the aorta, the arteries in the legs and arms or veins – is similar to heart disease in the sense it is caused by atherosclerosis (hardening of the arteries) of the arteries or venus insufficiency (poorly functioning veins). The potential severity of these diseases is significant. It can lead to hospitalization, severe disability long term and can even be fatal. With early detection, most vascular disease cases can be treated effectively. There are several simple ultrasound screening tests that detect these problems, all of which are non-invasive and painless.

WHAT WE OFFER AT THE VASCULAR CENTER

The Vascular Center is a AAAASF accredited facility that offers non-invasive diagnostic vascular testing for Venous and Arterial diseases. Accreditation is voluntary and requires the validation of consistent usage of techniques and protocols that assure the highest level of clinical accuracy. This accreditation demonstrates our commitment to quality vascular testing that meets or exceeds nationally recognized standards.

The quality of vascular testing is a key component of effective diagnosis and care. The Vascular Center Laboratory provides non-invasive testing to identify vascular diseases. Test results are read by our expert team of vascular technologists and specialists. These tests are critical in identifying or ruling out conditions such as Peripheral Arterial Disease (PAD), Deep Vein Thrombosis (DVT), Renal Artery Disease, Aortic Aneurysms, and Venous Disease. 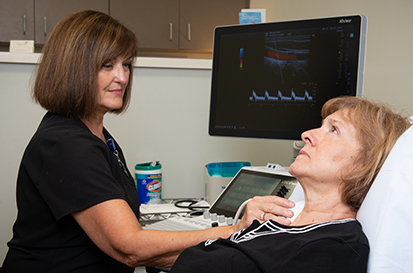 Our team of highly trained vascular technologists will provide you with the care and expertise you need to get the proper testing and evaluation.